Shannon M. Awsumb has successfully represented local and national clients in a wide range of business disputes in state and federal courts across the country. Her practice focuses on complex commercial litigation (including business torts, breach of contract claims, and ownership and governance matters) and insurance coverage disputes involving commercial property, fidelity, and professional liability claims.

Prior to joining the firm, Shannon completed clerkships for the Honorable David G. Campbell, District of Arizona (2003–2004) and for the Honorable John S.W. Lim, Hawaii Intermediate Court of Appeals (2001–2002). 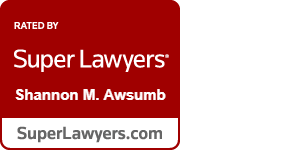 Successfully petitioned the Court of Appeals to engage in infrequently exercised discretionary review of a trial court privilege order and to grant a writ of prohibition in favor of our client in December 2020. This resulted in a published opinion on a significant issue of first impression under Minnesota law involving attorney-client privilege held by joint clients, see In re Lawrence, 954 N.W.2d 597 (Minn. Ct. App. 2020), review denied (Minn. Mar. 16, 2021).

Following a five-day trial, Hennepin County District Court Chief Judge Ivy Bernhardson ruled that Kim Lund was the “prevailing party” against her brother, Tres Lund, and various Lund entities, in a lengthy legal battle centered on the value of Kim Lund’s ownership interests and Tres Lund’s exercise of power and control over Kim’s interests. In the court’s 54-page opinion concluding this complex shareholder dispute, the court awarded Kim $45,225,000, which means that the Lund companies must buy Kim Lund out over time for that price. The court also awarded Kim Lund her court costs.

Represented a national bank and its holding company in a coverage litigation in Arizona involving a $15 million financial institution bond claim relating to a $26 million fraud loss and successfully resolved the claim.

Represented a California business that led to a total recovery of over $73 million for our client in California. The case involved alleged financial self-dealing by the developer of a large residential complex in California.

Represented a Minnesota businessman in a breach of contract action that resulted in a unanimous $878,000 jury verdict in favor of our client after an eight-day jury trial. The case involved a claim by our client that his partners had breached a contract to work cooperatively to acquire and develop certain property on the North Shore of Lake Superior and that the breach had caused damages.

J.D., with distinction, University of Iowa College of Law

J.D., with distinction, University of Iowa College of Law